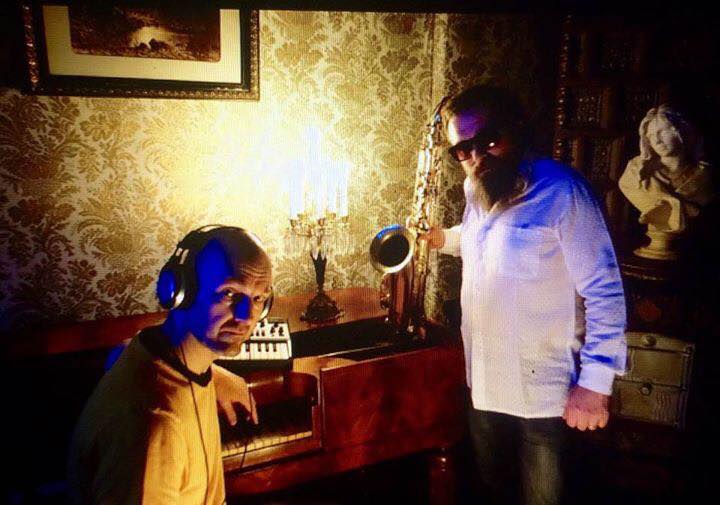 They met by coincidence. In September 2016, multi-instrumentalists Sid Hille and Herbert Könighofer first toured Austria “in the shadow of the moon” (Kuun Varjossa) and presented their program oscillitaing between mystic scandinavian sounds and badass realities.

In March 2017  they were able to realize a return-visit to Finland and Estonia and performed in jazz-clubs, museums and churches in Pori, Helsinki, Tallinn, Tampere and Kokkola. Besides working as a duo, they had the opportunity to perform with other Finish and Estonian artists, such as F# with Jori Huhtala (FI) on Bass, Markus Ketola (FI) on drums, Virpi Taskila (FI) on e-violine and Lina Saar (EST), vocs. Especially their show at Sara Hildén Art Museum in Tampere and their stay at artist-residence Villa Eläintarha Helsinki  allowed them to work across arts genres, be it contemporary visual arts or literature. While their first Austria tour was themed with “water and moon” and the artists immersed themselves into physics, nature, lunar inspiration, surfaces and depths, and the scope between scandinavian mystics and alpine grounding, their Finland and Estonia tour 2017 was coined by an “inspirational object a day”, which they’d choose spontaneously and make the starting point for their artistic explorations.

On another Austria tour, which followed in May 2017, Sid Hille and Herbert Könighofer could pass on their enthusiasm and “playfoolness” in their approach to music with youth in a workshop in Hallein, which did not only allow them to introduce the spectrum of opportunities with their various instruments but also to explain their way of improvising, which is distinguished by listening, permittance and participation  – trainable ablities that do not only prove to be important in music, but also in other contexts of life!

In 2018, Sid Hille and Herbert Könighofer toured Finland once again, teaming up with renown artists  of F# and performing at impressive locations such as Helsinki’s Temppeliaukio Church or Sara Hildén Art Museum in Tampere. On this occasion, the musicians did not only make it to the ecclesiastical newspaper, they also received a > live review of their Joensuu-show (follow link for English translation, kindly translated by Jori Huhtala – even though it sounds more funky in Finnish!)

When the pandemic hit, Herby was actually supposed to be sitting in some Hytti in Helsinki, catching funny Finnish phrases, such as Kalsarikännit (A drink. At home. In your underwear). Well, in the face of Corona-restrictions, the proverb finally made a lot of even more sense!

So there they were, stuck in Vienna, respectively in Helsinki in 2020, all tours and shows cancelled. Therefore, Sid and Herby got busy as bees trying to figure out new formats to share their tunes, to allow us all to get out of the madness for a moment, to perform, listen and relax a little. Well, one option for sure was to go virtual. This will also be an option that should be considered after “the crisis” – just hopping on a plane on a low budget flight to do a quick stopover concert has become a pretty old school idea by now…

The Hille/ Könighofer Experience prove to be a project predestinated for this kind of collaboration. It actually started off as a digital collaboration that turned analogous on their first tour in Austria in 2016, performing their first show 30 Minutes after their first face-to-face encounter.

What followed was a series of experimental online concerts, merging tunes via Social Media channels – with numerous unexpected glitches, struggles with latency and different realities… but all in all a surprisingly positive sound-experience and a lot of fun!

Thanks to the support of the Austrian Federal Ministry of Arts, Culture Civil Service and Sport,

their collaboration has “survived” the pandemic, so far. By establishing a home-studio, seemingly endless online-sessions and a lasting musical friendship, the “Hille / Könighofer Experience” continues!

What remained is the “Hille / Könighofer Experience” of understanding that this project has the capacity to continue in challenging times but also the strong desire to catch up in person again, to share the same actual stage and to improvise directly.

In fall 2022, Sid Hille toured Austria together with Herbert Könighofer to continue the “proper” live-experience and they will set sails again (literally, in the Baltic Sea), together with F# in the end of October 2022.

The Hille / Könighofer Experience has kindly been supported by:

and many more – kiitos!
It is a co-production of Brian Brain – club audioprovocateur, SatnaMusic and marmota agentur