Born in Lower Austria in 1971, Herbert Könighofer commenced his professional career as a musician at Eisenstadt’s military music. After a year abroad as sax-player of Alabamas Soul Band on Tenerife, Könighofer returned to Austria in order to collaborate in and establish various projects, such as Joruma, Jesus Christ Smokes Holy Gasoline, Blaumarot, the black hakawati, Herby King Jazz Quartet, or ZAVS.

In the end of the 1990s, Könighofer began to focus on the city of Salzburg, where – together with other artists – he created bands such as k3, or the concert-series AIGENtlich Jazz.

With the band the merry poppins, Könighofer travelled the world from A as in Almaty to Z as in Zurich and could gain artistic inspiration from intercultural exchanges with artists in Asia, Europe, or the Middle East.

These times are mainly documented in films such as Sina Moser’s artist portrait I und…, Lost and Found Tour on k3 goes India, or club videoprovocateur‘s the merry poppins Central Asia Tour 2013 – the band. the trip. the film. Herbert Könighofer furthermore contributed film-scores to projects such as Meeting Phuntsok Lhamo, a.o.

Ever since 2012, Herbert Könighofer has been working on the project Brian Brain – club audioprovocateur and has invited serveral international and local musicians to the club, among them Sina Moser, Sucheta Ganguly, Prabir Kumar Mitra, Franz Lirsch, Courtney Jones, Arno Briggman, Peter Kronreif, Chris Kronreif, Camillo Jenny, and many more.

As of lately, Herbert Könighofer has been focusing on the project Moon on High with the Austrian pianist Hannah Eisendly and Taiwanese counter-tenor and lutist Cheng-Ying Chuang, on the duo project with Kuun Varjossa with Sid Hille and on the genre-transcending performance piece Mind Crossing by Tal Gur and Jasmin Avissar. 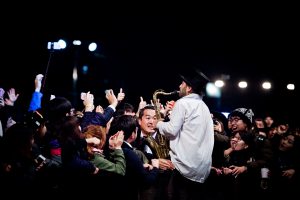